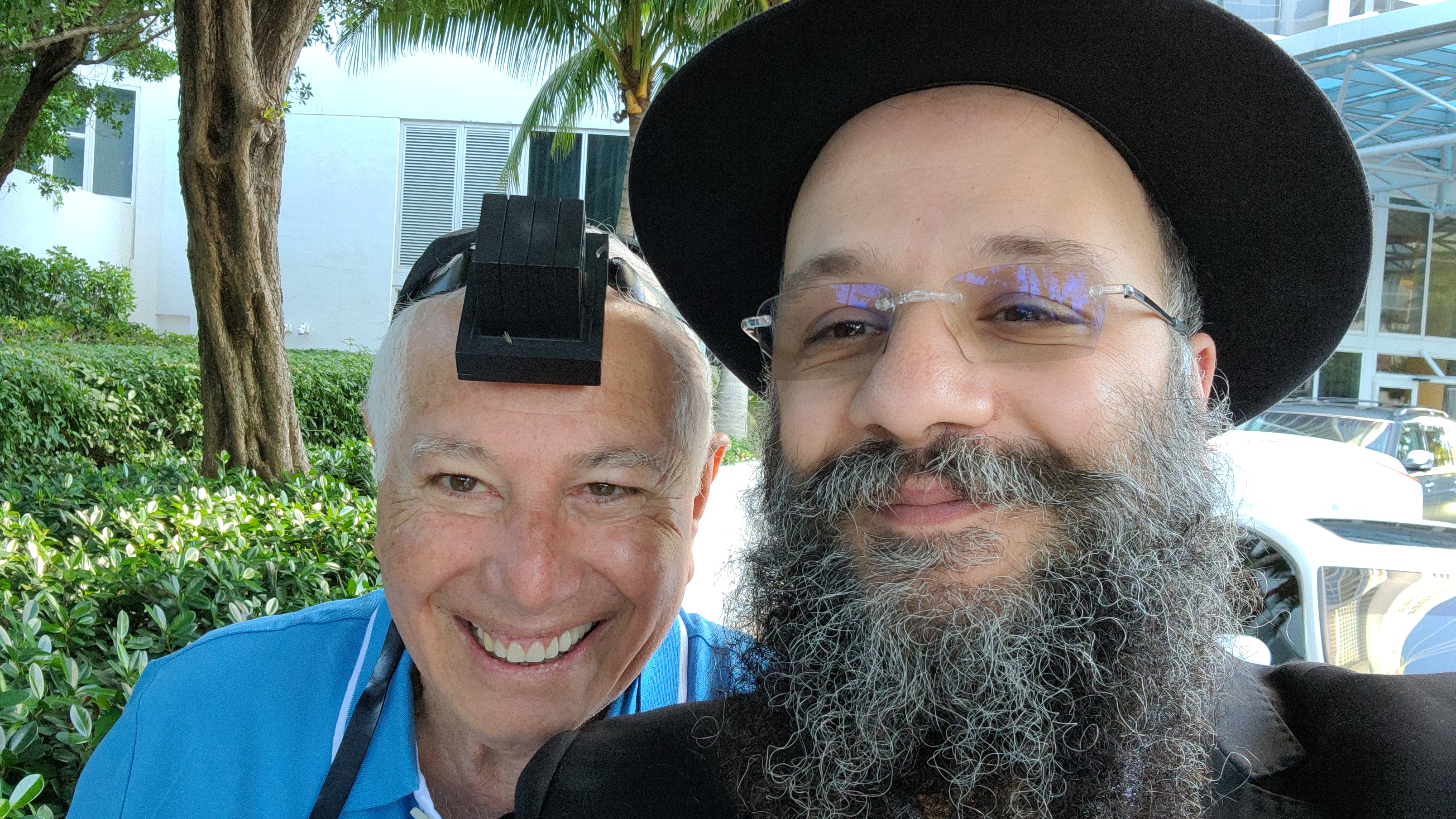 As a shliach to the exclusive community of Golden Beach, Rabbi Chay Amar has more than enough wisdom to share. His shlichus was hardly smooth sailing, but his simcha and strong principles made him come out ahead. In this issue, Rabbi Amar shares financial advice, how to stay firm under pressure, and what wealthy people really want from you.

When my wife and I first came to Miami, the Jewish presence there was very different from today. Just to give you an idea, there was only one Kosher pizza store and one kosher Chinese restaurant in the entire area! Today, there are hundreds of Kosher eateries, reflecting the remarkable explosion of Jewish life in Florida over the last twenty-five years.

Through a series of hashgacha pratis, I ended up as the shliach to Golden Beach, an exclusive, upscale neighborhood. Home to many successful businessmen living in luxury homes overlooking private beaches. Golden Beach was as intimidating as it gets. I definitely couldn’t afford to live there, so I rented a temporary place nearby and began a minyan in the home of somebody I knew in Golden Beach. He promised me a certain salary, and I tried to put together a minyan.

Close to seventy percent of the population was Jewish, but there had never been an Orthodox presence in Golden Beach before. After two weeks, the man who was hosting the minyan in his home and paying my salary approached me. He explained that unless I chilled out a bit and did things his way, he would cut my salary in half.

Baruch Hashem, I had the clarity of mind to remain calm and explain that I would not bend my standards. My salary was cut and things became very difficult. We had two little babies at the time, and it was very hard to put food on our table. Sometimes, my wife would call me from the store because the credit card wasn’t going through.

After six rough months, I left the minyan in the man’s home and started a new one in a nearby hotel. There I was, trying to convince millionaires to leave their luxury homes and join my minyan in a cramped hotel room! It was no easy feat, and I had to beg people to come.

One week, only three people from the community agreed to come. Since Golden Beach is a beautiful vacation area, I looked around the hotel for Yidden who might be staying there. I managed to gather seven of them and was able to complete the minyan.

One of my balebatim was not impressed. “Rabbi, what kind of community minyan is this? Only three of us are here!”

I looked him straight in the eye and said, “Yonah, you own a hotel in South Beach, right?”

“Did you buy the hotel with cash? Or did you put down thirty percent and borrow the rest?”

“I put down thirty percent.”

He laughed, appreciating my honesty and confidence.

I was just starting out on my shlichus, and it was sometimes intimidating to deal with such successful, confident people. But that day, I learned a big lesson: People appreciate and respect you so much more when you aren’t intimidated by their money. They don’t need you to be afraid and bow to everything they ask you to do, because everybody else already does that.

Slowly but surely, our minyan outgrew the little hotel room. When a space in the hotel that used to be a nightclub went up for sale, I knew I had to buy it. The size was right and it had its own entrance, so it would be the perfect place for our shul.

We started renovations and set our grand opening day for Lag Ba’omer. Three weeks before the opening, we ran into a major issue. We needed a certificate of occupancy to open our doors, but the fire inspector wasn’t available for the next two months! We begged him to come sooner, but it didn’t help.

The developer looked hopeless, but I was not deterred. “It’s not my problem, and it’s not your problem,” I told him. “It’s Hashem’s problem! Let’s dance!” He looked at me as if I was crazy, but I took his hands and danced as if I didn’t have a care in the world.

The next thing we knew, the inspector randomly called back and said he would be coming the next day! He gave us a temporary certificate of occupancy, and we were able to open our shul on time! We couldn’t believe it!

There is no other way to explain it. We were told that it would take months, but when you do your shlichus with simcha, all your challenges fade away.

Before I bought the nightclub, I bought an empty lot right in the middle of Golden Beach. I wanted to build a massive shul, but the balebatim wanted to keep their area residential and were very upset at the idea.

I had to make a decision. Should I tick everyone off and build the shul as planned, or should I scrap my plans to keep the peace? It wasn’t easy, but I decided to sell the lot and look for a different location, which turned out to be the nightclub that we’re in until today.

The most important thing is shalom. What good is a big building if half of the community isn’t talking to each other? As Yidden, we have to do what Hashem wants from us, not what we think will bring us fame and success.

I’ve tried many times to buy bigger properties, but they never worked out. I realized that my shlichus is to build people, not buildings. It’s the time and attention you give that makes a difference in people’s lives. They care about how much you care about them, not about how much you have or how fancy your building is.

One of my biggest supporters always tells me, “You know why I support you? Because when I had nothing, you were there for me. You encouraged me, followed up with me, and didn’t act differently to me because I had no money. You welcomed me with the same smile and honor as you gave everyone else.”

When you’re there for people when they go through tough times, asking about their kids and trying to find a way to help, that’s what makes a difference. Sometimes, you can’t help, and all you can do is cry with them. But that’s what matters most.

Unfortunately, money makes things move in this world. After all these years, I’ve learned that the best way to handle finances is to ask your balebatim for recurring monthly donations. I tell them that unless we have a special project that needs extra funding, I won’t call again to ask for money! They love it, and knowing that I have a stable income gives me peace of mind.

Since I know exactly how much money comes in each month, I know my budget and don’t spend more than what I have. People tell me to do big fundraisers and end-of-year campaigns, but I don’t want to depend on one-time large donations. I know myself; I’m better than Houdini! I can make a million dollars disappear in one minute!

The purpose isn’t to suddenly raise a lot of money and then feel that you have enough money for everything you need. Unless you budget carefully, the funds will disappear fast and you will be left with nothing, dependent on large donations once again.

When people feel that you’re not always thinking about how to get more money from them, they are happy to give. My balebatim understand that I need funding, and they respect my organized system of recurring donations.

As a shliach, I work to strengthen my balebatim in all areas of Yiddishkeit. In the beginning of my shlichus, I had balebatim who would drive to my shul from other areas because they liked me. I told them, “If you really like me, don’t drive to my shul on Shabbos. Go to the Chabad house that’s closest to you.” Baruch Hashem, I am proud to say that most of the people who come today live within walking distance.

Each Yom Kippur, we sell an opening of the ark specifically to people who will agree to keep Shabbos once a month. Baruch Hashem, many balebatim have become Shomer Shabbos through this initiative.

In areas related to taharas hamishpacha, I’ve seen miracles happen. A few couples in my community didn’t have children, would miscarry, or were told that they couldn’t have children anymore. I taught them the halachos, and they took it upon themselves to keep taharas hamishpacha for a minimum of three months and then we write their resolution to the Ohel. Baruch Hashem, at least six of these couples gave birth to healthy babies!

Another area we focus strongly on is learning Torah. Each week, I order booklets of Torah shiurim in every language for my balebatim; my biggest pleasure is seeing successful businessmen sitting and learning.  Giving speeches in shul and teaching Torah classes to your balebatim is great, but when they learn Torah on their own, they’re affected on a much deeper level.

Today, our shul has three minyanim with learning both before and after davening. Don’t worry if you don’t speak English—we have shiurim in Spanish, French, and Hebrew as well! Some of our baalei teshuvah even teach the shiurim! We just opened a yeshiva for women, which my wife runs. Baruch Hashem, Golden Beach has really become a makom Torah, and the Yidden here are growing in their Yiddishkeit each and every day.

We Are Just Partners

On that cold winter night in 2006, we pulled up in front of our new home. There

In the summer of 1985, having completed a two-year shlichus internship at Yeshiv

The Whole World is Made of Small Shtetlach! —The RebbeIn a Southern Color

Mendy and I were both born and raised in Crown Heights, but our families moved d

The first time I came to Montana, I was still a bochur. It was the summer of 200

Every Connection To Hashem is a Win - Rabbi Yehuda & Dinie Pink - Solihull, England:

Doing shlichus was always a given for me. My wife and I both come from Chabad ba

It's funny they say you can find Chabad anywhere that has coca-cola. This week C

Being a shliach in Minnesota is all I know. This is home to me. My father’s be