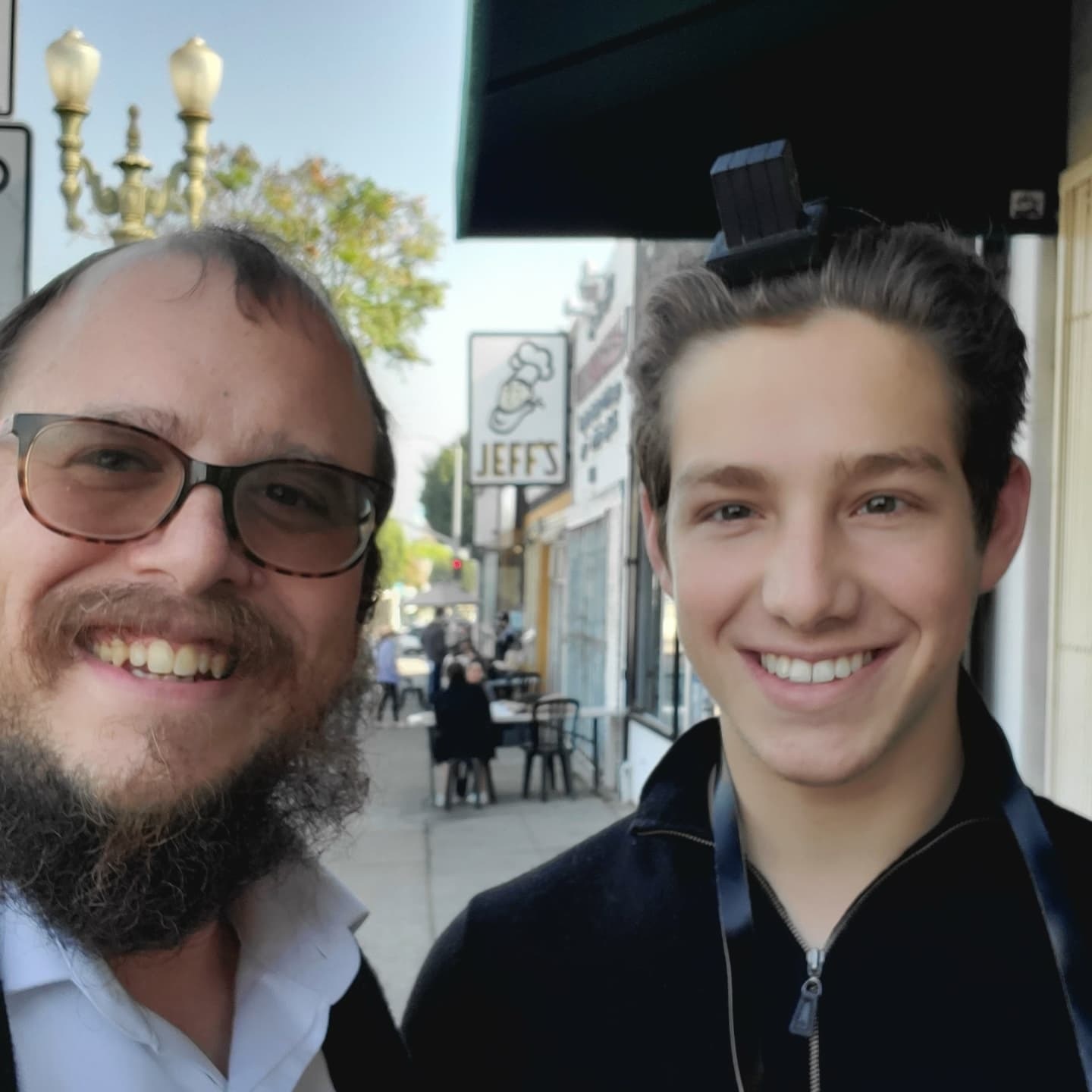 Most shluchim you meet may have grown up in Chabad homes, but I did not.  My father was a special yid, a man who referred to himself as “a Jew without labels,” and I attended Litvishe yeshivas throughout my formative years. My older brothers became Lubavitcher Chasidim, and attending the Rebbe’s farbrengens ultimately led me down a similar path - the energy in the room, the holiness in the air and the light that seemed to surround the Rebbe just drew me in.

The concept of shlichus intrigued me, particularly campus shlichus which I imagined to be focused more on learning with students and less on organizing and logistics.  My wife Runya and I were hired by Chabad of California to move to LA and work on the "Kehos Chumash". At our request, at the same time we were also appointed as University of Southern California’s first shluchim in 2000.

Word on the street at the time was that as a public college, UCLA was the school with the Jews, while the very upper crust and private USC was the school without any members of the tribe.  Runya and I at first lived in Pico-Robertson, and we went to USC for Shabbos and to teach lunch and learn whenever we could. At that time, if we got three or four kids for a meal Shabbos that was a real accomplishment. After a couple of years, we moved out to campus full-time.

Nothing came easy - money was so tight that I went without medical insurance for several years - but step by step, things moved in a positive direction. We went from having 30 people at our 2001 Purim party to close to 1,000 in 2006,  while attendance at our campus menorah lighting swelled from 50 in 2007 to over 300 last year.   One parent who was also an alumnus came to me with tears in his eyes one Chanukah, telling me he never could have imagined something like the Menorah lighting in the center of campus, because during his time in USC he felt like he was the only Jew there.  And back then, if you were Jewish, you kept that quiet.

When we reopened in fall 2021 for the first time post-COVID, we were expecting to have years of rebuilding ahead of us, but baruch Hashem that wasn’t the case.  We made sheva brachos for our daughter that first Shabbos, and in addition to our family guests, 180 students showed up for meals, a number that jumped to 300 the following week.  It’s crazy how the school that wasn’t supposed to have any Jewish life now has 250 students or more every Shabbos, and our budget for Shabbos meals during the fall semester was close to $150,000.

But the money is well spent - you can’t imagine the impact of a Shabbos meal at a Chabad House.    For many, it is their first experience with yiddishkeit and students tell us that it feels like their home away from home, even though it is actually nothing like their homes at all.  It is their introduction to the Jewish community where they see a Shabbos, hear a d’var Torah, and most importantly, they observe the interactions of a frum family. They really get a taste of what it means to be involved, to have a life that is focused on an ideal, and that becomes a gateway to everything else.

Is what we do hard?  Yes.  Is it rewarding?  Absolutely.  Imagine what it means to host 180 kids for Shabbos meals two days after you made a wedding.  When my wife had a baby, we still had students that Shabbos. If we have a Thursday night East Coast wedding, we fly home Friday morning, ready to do whatever we need to. It’s a different life, but it’s our life, and we wouldn’t trade it for anything in the world.

Steve* reached out to me after joining us for the first Shabbos of the fall semester to let me know he wanted a mezuzah, something we offer, and I went by his place to hang one up and to put tefillin on him. We got to talking, and Steve told me that his family was so disconnected from their Jewish roots that they sent him to Catholic school and took him to tour Italy’s cathedrals and museums for his bar mitzvah.

As Steve got older he got into Catholic art and music. Suddenly, he realized he was heading in the wrong direction. He recalled a picture of his grandmother lighting Shabbos candles, something that was clearly very meaningful to her, which prompted him to start looking into Judaism. That Shabbos he came to us at USC was the first time Steve ever met an Orthodox rabbi in person. He became a regular at our Chabad House and even bought his own tefillin.  Steve’s favorite Shabbosos at the Chabad House are the ones when we have no minyan, because that gives us an extra two or three hours to learn in the mornings.

The koach of a Shabbos meal is limitless.  Students come to us to have a good time and somewhere along the way they reconnect and everything else follows, but it all starts with a Shabbos meal.

37 different campus events, 110 dozen donuts and 2,500 Trader Joe’s potato latkes - Chanukah 2021 was one for the books, especially our menorah lighting at the Sigma Chi fraternity house, probably the most goyishe house on the row. Even Sigma Chi has a few Jews, so we went and did what we do – and that should have been the end of it.

Two days later, a few students stopped to help my wife bring 32 dozen donuts in from the car.  Simon was one of them and he recognized my wife from Sigma Chi, telling her he had been in the next room on the phone with his mother during the menorah lighting.  In the course of that conversation, Simon’s mother shared for the first time ever that she was Jewish. Of course, Runya told Simon that that made him Jewish too.

Two weeks later Simon showed up for a Shabbos meal. He told everyone that that night was his favorite moment of the semester because it was the first Shabbos of his life. His mother had even asked him to take a picture with me, which obviously wasn’t happening, and I invited Simon to come back during the week to put on tefillin, promising him we could take as many pictures as he wanted.    They tell me that Simon wants to learn more about yiddishkeit and go on Birthright this summer, incredible results from our Sigma Chi menorah lighting.

Daniel* came to us as a pre-med student who had just come back from a summer Israel tour program. He was inspired and loved to learn and after time with us, he eventually went back to learn in yeshiva in Israel. When Daniel returned to USC I didn’t even recognize him -  he had grown a full beard, something that didn’t sit well with his Persian family who said  he looked like an Ayatollah and that he would never get a job.

Baruch Hashem, Daniel finished medical school and became a successful and well-respected cardiologist.  Fast forward about 20 years to a hospital board meeting to pick a new chief of cardiology, with someone suggesting Daniel for the job.  Daniel’s relatively young age had some hesitating, but one board member pointed out that with his beard, Daniel looked much older than he really was. So not only didn’t the beard hold Daniel back in his career, it actually gave him the ability to be the hospital’s youngest chief of cardiology ever.

Andrew He was the frattiest of frat kids. The first time his sister dragged him to our Chabad House for a Shabbos meal he was out the door within 20 minutes. But we got him to come to us on Pesach and after that he started showing up for meals and to learn with us. He started growing religiously. Somewhere along the way, Andrew decided to start wearing his yarmulka on campus, which was a big step, because he always felt that people were staring at him.  In time, Andrew started doing job interviews and he was up for an internship with a big firm, a position that he was sure he wasn’t going to land because he had worn his yarmulka to the interview.

Andrew came to me that weekend and told me that maybe wearing his yarmulka hadn’t been the smartest idea and I assured him that he would never lose out by wearing a yarmulka.  Thankfully, Andrew got his internship, eventually moving on to a big firm while also earning a master’s degree.

One day, the guy sitting next to Andrew in shul told him he was looking for a CFO. There were plenty of qualified candidates out there to pick from, but this guy wanted someone he could feel comfortable with - a frum yid with a yarmulka - and he hired Andrew. In the end, Andrew got to see that my words were really true - it wasn’t any of his fancy degrees that got him his job as a CFO - it was none other than his yarmulka.

To receive the weekly PDF on your WhatsApp join here:
https://chat.whatsapp.com/CPKtqHY7w9O1fJGY4OXZsP
or DollarDaily.org to join the email list.

Taking the Sin Out of Sin City

St Lucia has a small population of about 180,000, and only a fraction of that is

Revitalizing the Shtetls of Argentina

Starting a Community From Scratch

Miles and Miles of Shlichus

Rabbi Mordechai and Sorale Rodal of Norwood, Johannesburg, SAI had been to South

I closed my eyes and asked G-d for a sign

Rabbi Mendel and Esther Lifshitz & Family of Boise, IdahoOur shlichus is not