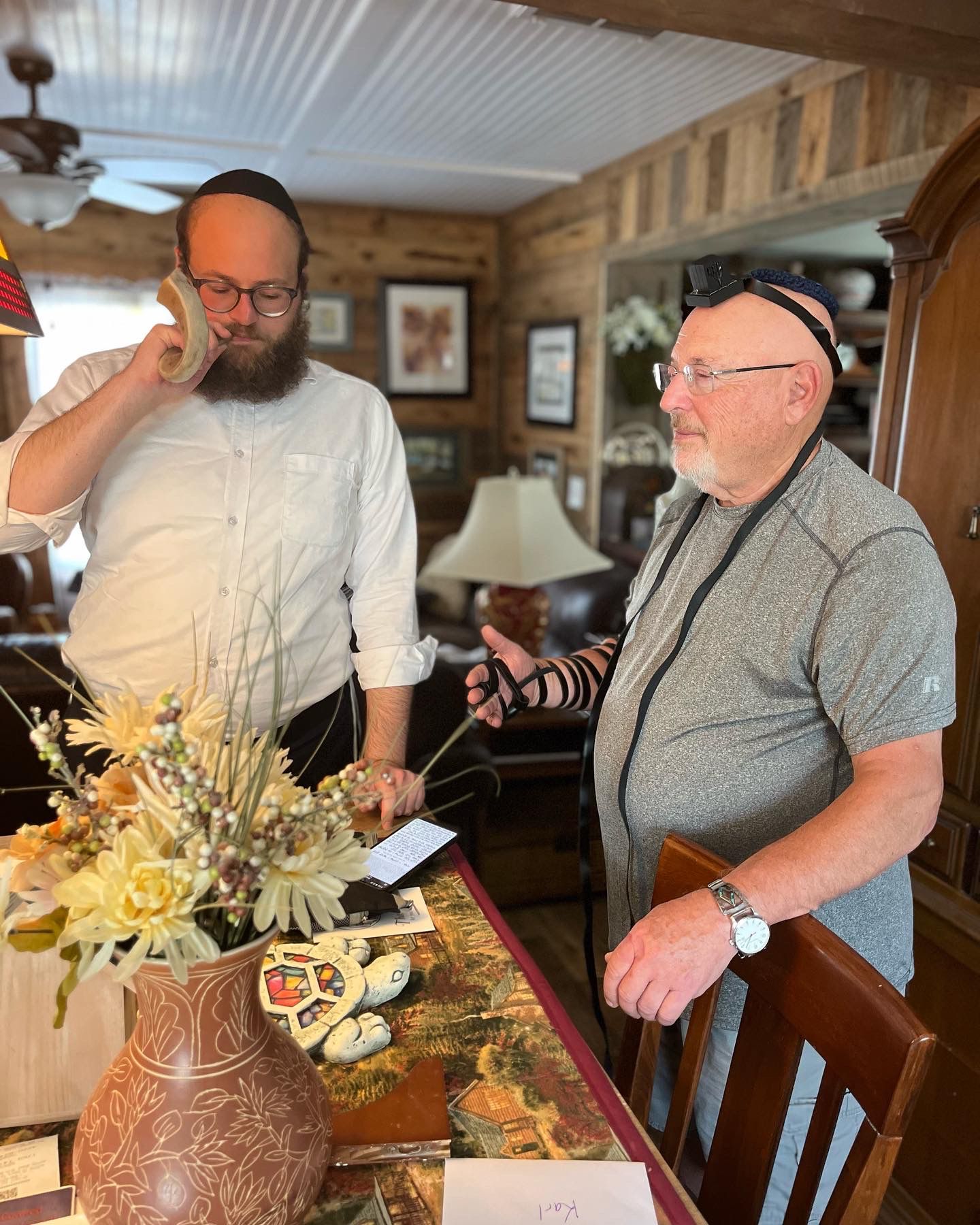 Rabbi Chaim and Chayala Markovits, Chabad of Rural Georgia, USA - Ingathering One Jew at a Time

Ingathering One Jew at a Time

Our shlichus is unique, since we are full-time Merkos shluchim. Over the summer, bochurim are sent out in pairs to small communities all over the world. What bochurim have been doing for the better part of the century - knocking on doors and cold calling - is what we do every day.

When we were first approached, we were wary about spending so much of our lives in an RV. We agreed, but were still very nervous. Before making such a big decision, we found inspiration in the Rebbe’s works. My wife opened a volume of the Rebbe's letters, the Igros Kodesh, and found the following letter:

“In previous years,” the letter read, “it was enough to follow the path of the Maggid of Mezritch, who stayed in one town and waited for Jews to travel to him. Now, we must revert to the path of the Baal Shem Tov, who traveled from one place to another, searching for Jews, meeting them where they were, and inspiring them. Today, there are less Jews initiating contact, and less willingness to sacrifice comfort for the sake of Yiddishkeit.”

This letter was the ultimate encouragement for the shlichus we’d been asked to do. Most of our constituents are those who never had an opportunity to engage with Yiddishkeit, and so “fell off the radar,” Jewishly speaking.

A month after we began this life mission, COVID hit. Every door I was ready to knock on was shut tight, and the people I yearned to meet were in isolation. It was a tough time - financially, psychologically, and emotionally. When the state started to open up again, we were raring to go!

Southern summers are notoriously hot, and the humidity is unbearable. COVID restrictions compelled me to meet people outdoors - with masks on. Despite the discomfort, people were so excited to learn about Judaism, and were amazed that a rabbi they’d never met before could care for them and be invested in enhancing their Jewish experience.

Our first event as official shluchim would be a grand Pesach seder in Macon, one of the larger cities we serve. We planned it for months, envisioning each detail, right down to the color scheme.

My wife called every hotel and convention center in Macon. None of them would allow outside catering. This left us without a location for our Seder.

Finally, one hotel manager, cutting off my wife mid-spiel, asked, “Are you guys Chabad?”

Josh, as he introduced himself, had recently moved to Macon, but was familiar with Chabad from his hometown. He really wanted to help us. He was incredibly accommodating, giving us a discount, allowing us to kasher the kitchens, and giving us full access to the hotel’s storage.

“I just want my family to have a true, authentic Jewish experience,” he said.

When April 2020 finally came, COVID made it impossible to realize any of our grand plans. But in 2021, we called Josh back.

“Whatever it takes!” Josh agreed, heartily.

We began to advertise, and hosted 100 people over the first days of Yom Tov. People came from all over Georgia to join and see what Chabad had to offer. For many, it was the first Pesach seder they’d ever experienced.

It was towards the end of the second seder, when most of our guests’ eyelids were drooping as we recited Hallel, that the door to the conference room flew open with a loud bang.

“What’s going on ova’ here? What’s happenin’?” asked a loud, abrasive voice, with a strong Bronx accent. We had already opened the door for Eliyahu Hanavi, and this man clearly was no prophet of old. He was massively intimidating, complete with leather jacket and Harley Davidson gear. “Is this a seder here?” he asked, gesturing to the tables.

We jumped up to welcome him and invite him in.

“Name’s Mikey,” he grunted, accepting the plate of food my wife gave him.

Mikey told us that he was adopted as a baby and grew up in the Bronx. He’d recently discovered he had a sister, here in Macon, Georgia.

“This was the only week I could get off from work,” he told us. “I drove my Harley all the way from Brooklyn. I was excited to meet my sister, but I grew up pretty traditional, ya’ know? Look,” he pulled out his wallet and showed us a picture of the Rebbe. “I keep that in my wallet and take it everywhere I go. So I was feelin’ bad that I wouldn’t be able ta’ do anythin’ Jewish for Passover. I just came back from meetin’ my sister. When I entered the hotel lobby, I heard singin’ - Jewish singin’ - comin’ from this room! This has been quite a day!” Mikey wiped tears from his eyes. “First meetin’ my sister, and now findin’ a seder, right here, in my hotel! I know the Rebbe sent you here. You’re G-d’s messengers!”

We plied him with chicken, kugel, matzah, maror, and charoses, and continued to farbreng late into the night, about Yad Hashem, hashgacha pratis, and the deeper meaning of Yetzias Mitzrayim.

On a recent trip to New York to visit the Rebbe’s Ohel, our flight was delayed. We ran into a nearby store to get some food to tide us over.

We caught up and reconnected, happy to meet each other in another amazing stroke of hashgacha pratis.

A kindly neighbor in LaGrange, Georgia, told us about an elderly Jew who lived a few blocks over.

We knocked on the door and made the acquaintance of Marvin, a 95-year old WWII vet, and his 93-year old sister, Edith. It was their first Jewish experience in decades, and they were both very emotional.

Our volunteers helped him wrap tefillin for the first time in his life.

“Maybe this is why I’ve lived so long,” Marvin said, with tears running down his face. “G-d kept me alive so I could do the mitzvah of tefillin.”

We arranged a model shofar factory, just before Rosh Hashana, in one of our cities. Everyone enjoyed the demonstration, kids and adults alike. After everyone had left, one family stayed behind.

In a rich, Hungarian Yiddish, the father told us, “Rabbi, this event was amazing.”

We were astounded to hear Yiddish in rural Georgia, and asked him to share his story.

My name is Avraham. I grew up as a Gerrer chassid, in Boro Park. When I was 18, I decided to run away from home. With nowhere to go, I traveled to the army base in Georgia and enlisted in the U.S. Army.

After my service, I met a non-Jewish woman, married her, and had these two boys here. I haven’t read a Jewish word or done a single mitzvah since I left home, twenty years ago. Last week, I saw an advertisement for this shofar factory. I knew I had to bring my boys, even though it’s a two-hour drive from our home. It struck me that my sons didn’t even know what a shofar was! I thought this program would be a nice, mild way to introduce them to the heritage I abandoned so many years ago.

We were silent for a moment when Avraham finished speaking.

“In two days is Rosh Hashanah,” I said, gently. “Would you like to put on tefillin?”

He began laughing. “No way, rabbi. I haven’t done that since my yeshiva days!”

“But it’s erev Rosh Hashanah,” I urged him. “You’re here already, and my tefillin are right here. The sun is about to set. Take advantage of the last moments of the Jewish year.”

Avraham finally agreed, and I took the tefillin out of my bag. Avraham stared at the tefillin, as if mesmerized.

“Would you like to say it together?” I asked.

“I’ll repeat after you,” Avraham answered. “Maybe it will come back to me.”

Avraham could not finish the passuk. He broke down, his shoulders heaving with sobs. We too, watching, teared up as well.

“Rabbi, this feels so good,” he finally managed to get out. He finished reciting shema, and thanked us over and over.

Something melted in him at that moment, and he was overjoyed to receive a lulav and esrog set from us a few weeks later. He drove over two hours to join us for Simchas Torah. Rabbi New, whose grandfather was a Gerrer chassid, sang Gerrer niggunim with him, and they both bonded very strongly.

We continued to stay in touch and learn together occasionally, but suddenly, one day, he seemed to vanish. He stopped attending our classes, and we couldn’t get in touch with him. When bochurim came for Chanukah, we asked them to check on Avraham in person, and find out what had happened.

They knocked on Avraham’s door. He opened it with a look of shock.

“How are you here right now? Who sent you?” he asked them.

“Rabbi Markovits gave us a menorah for you. He wanted to make sure you were okay.”

Over the last weeks, Avraham’s neighbors had complained about his lack of X-mas decorations.

“You’re clearly not a practicing Jew,” they pressured him. “You’re an American! Act like it! What self-respecting American doesn’t have an X-mas tree in their house?”

Avraham caved and bought the tree.

“I literally just finished decorating it,” he told the bochurim. “I felt so guilty. I can’t even walk into my living room! Not two minutes later, I find two rabbis on my doorstep. I just can’t believe it. It’s a clear message from Hashem. Hashem is telling me, Avraham, you’re a Jew, and you’ll always be a Jew. No matter what happens, I’m always here with you?”

The bochurim stayed in touch with him, establishing a weekly phone chavrusa. He committed to putting on tefillin every day, and we helped him buy his own set. Eventually, he recovered his original pair of tefillin that he’d received as a bar mitzvah boy. They are, once again, being used every day.

“My son, Medad, is in a Georgia jail,” a mother cried to me on the phone. “Please help him. Can you visit him and bring him some food and books?”

We had a young couple, Naftali and Sara Wilhelm, helping us for Purim. Since they were already on the road and near the jail, I asked him to try to squeeze in a visit to this Jewish prisoner. I also contacted the Aleph Institute for assistance. They gave me the numbers I needed, and after many repeated calls to the prison chaplain, visitation was granted. The Wilhelms spent their Purim morning chatting with Medad.

He's an Israeli, and completely secular, but prison had awakened his Jewish spark. It was a Purim without food, wine, or hamantashen, but it was still Purim. Naftali and Medad joined hands to sing and dance with Purim joy, right there in that dismal prison visiting room.

The chaplain shook his head in wonder. “In the fifteen years I’ve worked at this prison, I’ve never seen anyone get up to dance,” he said.

Simchas Purim, and the joy of knowing that a Jew is never alone, lifted their feet that Purim morning.

Medad’s mother called us back a few days later. “Thank you!” she said, warmly. “You have no idea what an impact your visit had on my son. I cannot thank you enough.”

“Ve’atem teluktu l’echad echad.” And you will be gathered, one by one. This pasuk from Yeshayahu encompasses the goal and method of our shlichus. We search for and recover neshamos, giving them positive Jewish experiences and a chance to reconnect to their heritage.