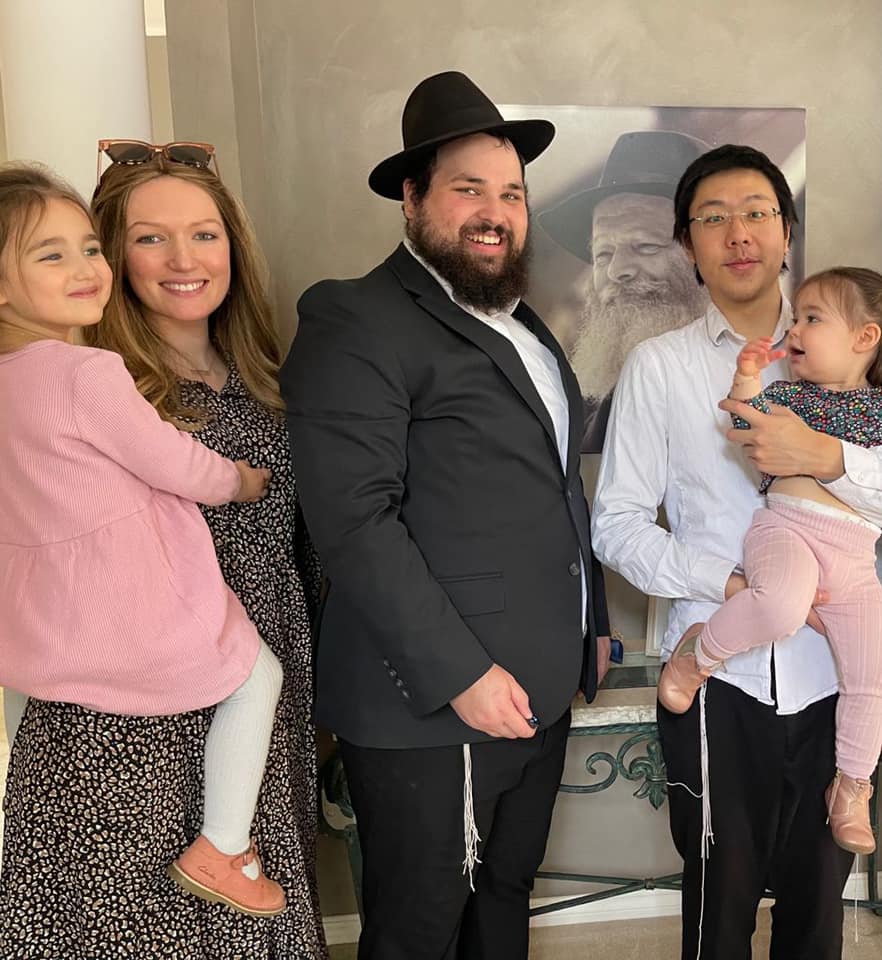 We order lulavim and esrogim months before Tishrei. It takes ages to ship anything all the way to the end of the world, and importing plants to New Zealand is a long, complicated legal process. We always breathe a sigh of relief when the shipment comes in, and we can finally hold a kosher esrog, lulav, hadassim, and aravos in our hands.

Two years ago, there was a shortage of avaros. The esrog, lulav, and hadassim came, but there were no aravos to complete the set. They weren’t in season in New Zealand, but I still tried my best to find a willow tree.

Unexpected tasks almost always arise on erev Yom Tov, but I would’ve never guessed I’d be hiking from tree to tree, bush to bush, searching for aravos. I called forestry companies throughout the country, and even considered dashing off to another country in search of the elusive plants, but they didn’t have any, either. My wife reached out to a florist we’d used for a previous party, hoping she might know where to find some.

I had nowhere left to check. With barely an hour left until yom tov, I decided to throw myself into other preparations, leaving the rest in Hashem’s hands. Our house was bustling with visitors, some who’d come to help us prepare the food, and others who were picking up their own daled minim sets.

The florist called us, palpable excitement in her voice. “I’m on my way - and I have something for you!” she told us.

Could she have found aravos? we wondered. And, more importantly, are they kosher?

She showed up with an armful of aravos - exactly enough for each set of daled minim.

I was overcome with emotion and began to cry, cradling the willowy branches in my arms.

“Rabbi, why are you crying?” our visitors asked.

I vocalized what had struck me so powerfully.

“In Jewish communities around the world, people spend hours examining every esrog and lulav for any tiny imperfection before carefully selecting the best they can afford. There are also those who buy extra hadassim to beautify their arba minim. But aravos? People just pick up a pack without giving it a second thought.

“The Rebbe explained that each of the four species symbolizes a different type of Jew. There’s the esrog Jew, who is fully committed to Torah and mitzvos; the lulav, who excels at mitzvos, but lacks Torah learning; the hadassim, who learn lots of Torah, but don’t practice mitzvos as much; and finally, the aravos, the Jews who neither learn Torah, nor do mitzvos. On Sukkos, we bind them all together, representing the importance of every type of Jew.

“This year, we had the esrog, lulav, and hadassim. Without the aravos, however, we couldn’t complete the mitzvah.”

That’s what shlichus is all about. Our shul may be full of esrog, lulav, and hadassim Jews, those who are enthusiastic about attending classes and increasing their Torah observance, but our mission is not - and cannot be - complete until we reach even the “aravos” Jews, those who are distant from their Yiddishkeit.

Four years ago, when we started searching for shlichus, we hardly even knew New Zealand existed. The island had received a slew of shluchim in the past, but for various reasons, those arrangements didn’t work out.

It was a pretty challenging adjustment for us as well, but my wife passionately encouraged me to persevere. “We’ve met so many Yidden in just a few weeks,” she told me. “They’re relying on us to teach them and their families about Yiddishkeit!”

We were told the community was so tiny that we’d never get a minyan, but when we got here, we found thousands of Jews, searching for warm and genuine Yiddishkeit. Baruch Hashem, our Chabad House has grown tremendously in the past four years. We have a Hebrew School with 35 students, and we’re the only community in New Zealand with a consistent minyan every Friday night and Shabbos morning.

This year was the first ever motzei Shabbos selichos minyan in New Zealand, and, baruch Hashem, Rosh Hashanah and Yom Kippur services were both packed. We were touched to see parents bring children they specifically kept home from school to honor Rosh Hashanah.

With Hashem’s bracha, we moved our Chabad House out of our home and into a brand new commercial space. We’re also building a mikvah! We’ve even brought couples down to open Chabad Houses in other parts of the country, and we’re actively looking for more.

We know our success has nothing to do with us and everything to do with siyata dishmaya. New Zealand was awaiting the perfect moment for shluchim to answer its craving for genuine Yiddishkeit. We are merely the Rebbe’s messengers, who happened to be in the right place at the right time. “Ashreinu mah tov chelkeinu,” how lucky are we that we were chosen to fill that need, dedicate our lives to transforming New Zealand, and take one more important step in readying the world for Moshiach.

Alan is a Kiwi - born and bred! His family has been in New Zealand for generations, and his great-grandparents are buried in the Jewish cemetery. He had a bar mitzvah at thirteen, but somehow, tefillin were not part of the ceremony.

I helped Alan put on tefillin for the first time in his life at seventy-five years old!

Alan is now one of our biggest supporters. He never misses a minyan, and even bought his own set of tefillin that he puts on every day.

Rowan had a traditional upbringing in South Africa, but hadn’t seen the inside of a synagogue in fifteen years. Since he started visiting our Chabad House, he hasn’t missed a single tefillah! He davens three times a day, and even took off work to attend the minyan on Rosh Hashanah.

Adam grew up in a frum, chassidish community. When he moved to New Zealand fifteen years ago, he had no access or connection to Yiddishkeit. Now, he’s regrowing his beard, and he wears tzitzis every day. He puts on tefillin and davens regularly, and hasn’t missed a minyan yet!

Their common thread is their thirst and longing for authentic Yiddishkeit.

When we first moved, we met a woman who poured her heart out to us about her fifteen year old daughter, Amaia. Amaia had bad experiences in Jewish summer camps in the past and now loathed anything at all Jewish.

“What do we do?” her mother cried.

Since she’d been described to us as a kind, warmhearted young lady, we hired her as a babysitter. Every Friday afternoon, while my husband and I ran around, setting up our living room as a shul and pulling challahs out of the oven, she would take our daughter to the park and play with her. As soon as we bentched licht and shifted into Shabbos, she would stiffen and walk out the door. She refused to stay for kiddush or participate in Shabbos in any way whatsoever.

Fridays were always crazy and there was so much going on. We never had the time to sit down with her and explain the beauty of our traditions and rituals. But still, week by week, Amaia softened. Simply being in a positive Jewish atmosphere had worked its magic, without her even being aware of it.

One week, instead of her usual, “Thank you, bye!” when we sat down for kiddush, Amaia joined us at the table. She’s joined us every week since then. She formed friendships with other Jewish teens that attended our Chabad House and developed a warm attachment to Yiddishkeit.

Amaia is determined to marry Jewish and will soon be leaving for Mayanot, a yeshiva for baalei teshuva in Yerushalayim. The change was gradual, but striking. Surrounded by the glow of a Yiddishe atmosphere, her neshama warmed and roused her pintele Yid.

I shecht my own chickens and therefore can keep parts of the chicken that aren’t readily available in butcher stores. I always save the feet and use them to give chicken soup a deep, rich flavor.

Emilia loved it and asked for the secret of our golden broth.

“We use chicken feet,” I admitted.

Emilia visited her local grocery, but they didn’t sell chicken feet. If she wanted to duplicate our recipe, she needed to buy kosher chicken feet from us.

It made her more sensitive to kashrus in general, and led her to start keeping kosher, bit by bit. We’re scheduled to kasher her kitchen shortly, and Emilia is continuing to learn about the various laws involved.

It’s absolutely true: the way to a Jew’s heart is through their stomach!

While in Melbourne, shortly before our second Chanukah on shlichus, we took advantage of the kosher conveniences and headed to the grocery to stock up.

“Honestly? Zero dollars,” I answered. “But just shop like normal. I’m sure Hashem will help.”

My wife grabbed a shopping trolley and proceeded to fill it up with everything we’d need for our upcoming Chanukah event.

The shopkeeper rang up each purchase, and as the number rose, my heart sank. I began chatting with him, trying to delay the inevitable, if nothing else.

“And how will you be paying?” he asked me with a smile.

I pulled out my phone to check my bank balance one more time, hoping that maybe I had misread a number.

At that exact second, we received an unexpected donation from someone we’d never even approached. His donation covered every cent of the order we’d just placed.

Mentally thanking Hashem, and the brachos of the

Rebbe for coming through for his shluchim once again, we gathered our bags and wished the friendly shopkeeper a “Freilichen Chanukah.”

I met Finn the day we came to New Zealand. I saw him again the next week, and figured he would be a frequent visitor. I didn’t see him again for the next six months, and then only once or twice.

A year and half later, I was in the supermarket and met Finn again.

“What’re you doing for camp this summer?” I asked him.

“Why don’t you help out at our camp, Gan Israel?” I suggested. “We have a kosher ice cream machine!”

He agreed, but didn’t show up when camp started.

A month and half later, Finn showed up for a random Friday night. Since he lived just two blocks away, he came regularly for a few weeks. He committed to walking to shul, but then we moved further from his home. I thought he wouldn’t come, but he showed up, week after week.

He even started coming on weekdays, and I taught him how to put on tefillin.

He started putting on tefillin every day, and then came to hear shofar every day in Elul. He bentched lulav and esrog in our Sukkah, and started keeping kosher and Shabbos.

Finn now aspires to be a rabbi - and a shliach! He learns sichos of the Rebbe on his own, and often asks me insightful questions about what he’s learned. He plans on attending yeshiva after he graduates high school to begin his rabbinic career.

We are so privileged to carry out the Rebbe’s shlichus and bring Yiddishkeit to New Zealand. Our lives are a series of hashgacha pratis stories and miracles, and the brachos we receive enable us to continue finding and inspiring every Jew of our “daled minim.”