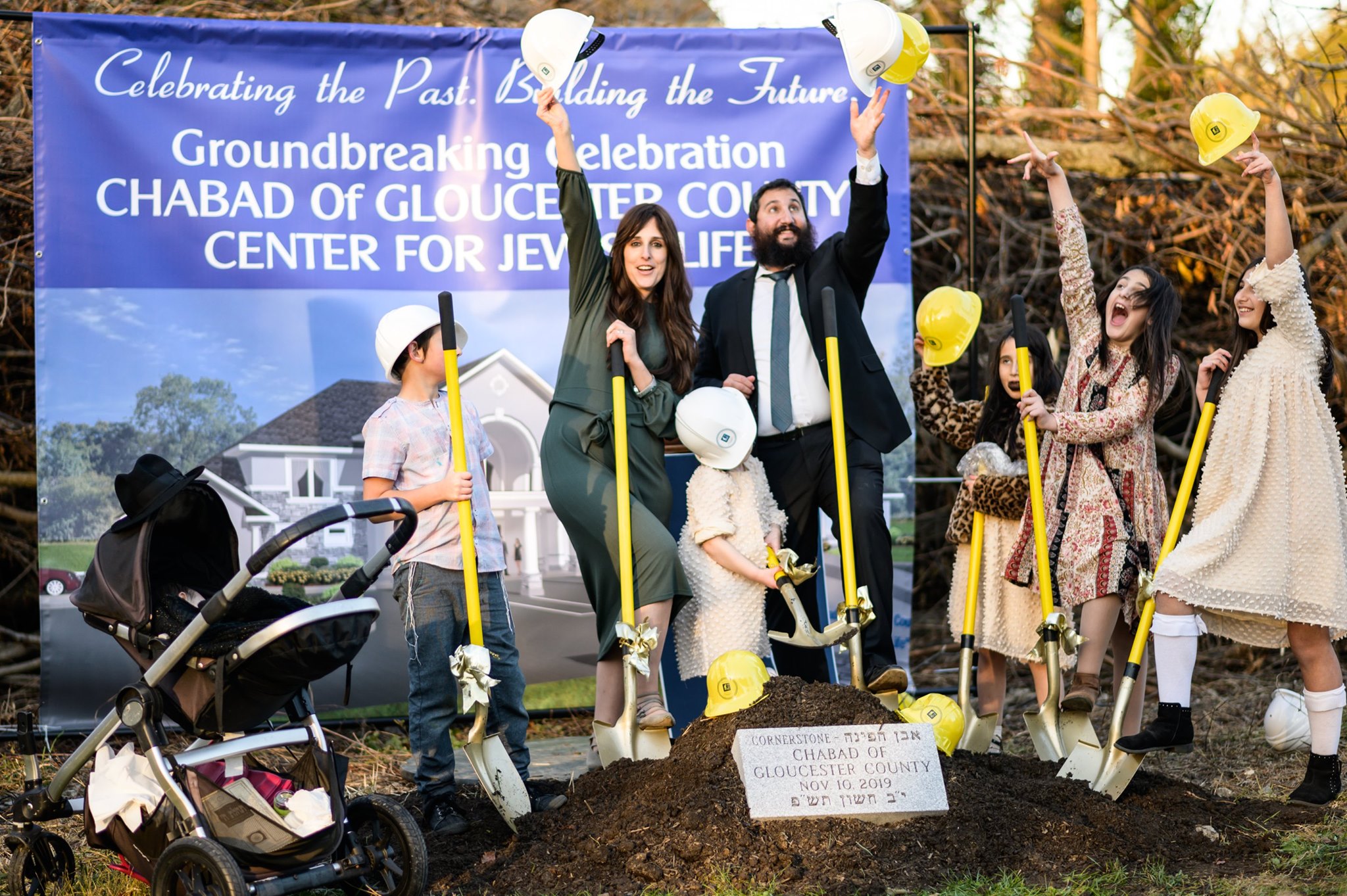 My husband and I were both excited to try and refill the gaping holes the Nazis and Communists ym”s left in our families. As soon as we descended from the high of newlywed life, we found it wouldn’t be quite as easy as we had planned.

I was working for a fellow shliach at that time, and although I hadn’t been there long or developed a deep relationship with the shlucha, she gave us the opportunity to be her son’s kvatter at his bris, a known segula for having children of our own.

We were ecstatic when the segulah bore fruit, and then thrust down further into despair when we lost the baby. With Hashem’s brachos, we soon found out we were expecting again. We were so grateful for this miracle, but the pregnancy wasn’t easy. I was in constant pain as well as many other issues that accompanied it.

The scans revealed partial success. One of the fetuses was developing into a baby. The other? A dangerous growth. It was during this time, while rushing back and forth to doctor’s appointments, hospital stays, and the gnawing anxiety and fear, we fulfilled another dream of ours: moving to Mullica Hill, New Jersey, on shlichus.

We moved into our new home the day after Rosh Hashanah. I reached up to kiss the mezuza with a grateful smile; a smile that quickly contorted with horror as our hopes and dreams shattered before we could even enter our new home. We had, again, lost the baby.

As thousands cried tears of repentance that Aseres Yimei Teshuva, we cried for pain, trauma, and tattered hopes. I was released from the hospital on Erev Yom Kippur. We drove directly to the Ohel, the resting place of the Rebbe, and I sat in the welcome center, trying to compose my tumultuous thoughts.

I turned my attention to the screen, which played non-stop videos of the Rebbe. The Rebbe was addressing a group of women at one of the first annual gatherings of shluchos. My heart leapt into my throat as I read the English subtitles in disbelief: “For those of you who have not yet been blessed with children, may you be blessed with children.” It felt like the Rebbe was talking directly to me.

As I walked out of the kinus (gathering of shluchos) banquet hall following the farewell session of my first kinus experience, I turned to a picture of the Rebbe’s wife, Rebbetzin Chaya Mushka and whispered a promise. “I promise I will name my child after you.”

As I walked into the cool night air, my phone screen lit up.

“Your test is positive!” the doctor told me happily. “Twins! And your numbers look great!”

Those nine months were simultaneously the longest and shortest months of my life. We faced more hospital visits - more close calls.  They put me on bedrest, but as a new shlucha, it was hard to keep to it. There were so many people to meet and a community to grow! I wanted to be there, in the thick of it, doing my job as a shlucha.

When we first moved, we knew only two Jewish families. We’d drive down the street, looking for mezuzos. When we found one, we knocked on the door and dropped off freshly baked challahs. We slowly built up our community, one mezuza and challah at a time.

Elul was, naturally, a busy time. We canvassed the neighborhood, spreading word about Rosh Hashanah services in our new shul. I sat in my doctor’s waiting room on Erev Rosh Hashanah, mentally running through my to-do list as I waited for a routine stress test.

Hashem had other plans. One of the babies had low fluid, so they immediately prepared me for the hospital.

“Can I just run home and put up the brisket?” I naively asked.

“Absolutely not!” the nurses scolded me. “You’re not leaving this room until you give birth!”

I was sorely disappointed I wouldn’t be allowed to witness the fruits of our labor - I’d been looking forward to meeting our shul’s new members. But when my nurse introduced herself to me, I considered it a good omen. Against all odds, in tiny, spread-out Gloucester County, she was Jewish!

On the second night of Rosh Hashanah, following the reading of Chana’s earnest tefilla for children, my two beautiful miracle babies were born.

The next day, I fulfilled my promise to the Rebbetzin. My husband named our first daughter after her, in a rented storefront filled with folding tables covered in plastic tablecloths.

Although I couldn’t be there myself, it was a very emotional moment for everyone in the shul, who were already deeply involved in our life.

The day after Rosh Hashanah, we walked into our home. I reached up to kiss the mezuza with a grateful smile; a smile that widened as I hugged our two precious bundles and remembered the long journey we’d started exactly one year before.

With a growing family of five children kn”h, we were struggling financially. To help offset some of the cost of groceries, I decided to apply for WIC. With all my kids in tow, we headed for the WIC office and settled in for a long wait.

A man sitting on the seat next to mine turned to me and asked, “Are there more of you guys around here?”

“Of course! My husband is a rabbi in this area!” Eyeing the “no soliciting” sticker in the window, I offered him a card and invited him to our Lag Baomer barbeque the next day.

When I got home, I told my husband about the sudden encounter.

“No; it slipped my mind. But he said he’ll bring his family!” I answered.

“I bet we’ll never see them again,” my husband predicted.

Events proved him wrong. Tyler did come the next day, with his family. Over time, they’ve become our good friends.

I thank Hashem for our financial issues, because otherwise, we would never have met Tyler. His extended family has all made strides in their Yiddishkeit, and Tyler is starting a podcast called “Hey, Rabbi.”

Our third child, Moshe, had clear sensory issues and development difficulties even as a toddler. We started with OT and speech therapy, but we needed more. He was in a Jewish day school, but he wasn’t doing so well there. Nearby shluchim connected us to an Israeli couple who run a neurological center. They diagnosed him with mild to medium autism.

With the guidance of a rav, we made the difficult decision to transfer him to a public school that could meet his needs. “The foundation of Yiddishkeit is menschlichkeit,” the rav told us.

We went to observe the school and met the teacher, Barbara. We were happy to learn she was Jewish. She became a part of our family; We loved her for taking care of our son and trying to be as inclusive of his Judaism as she could. During the “winter festival,” she put a menorah on the windowsill.

A short time later, Moshe’s class was visited by third graders from his school. One third grader saw the menorah and the yarmulkah on Moshe’s head.

“Is he Jewish?” she asked Barbara.

“So am I!” the girl said delightedly.

“So am I!” replied Barbara, laughing.

That day, I got a text from Leah, a neighbor who quickly became a friend. “My daughter Cecily was assigned to your son Moshe!”

Cecily and Moshe hit it off excellently, and I even hired her as a mother’s helper. Even after Moshe outgrew some of his challenges and was transferred back to a Jewish school, we kept in touch with Barbara and Cecily. We met Cecily’s parents and her two sisters, and they all became very involved with the Chabad House.

One day, Cecily told us that her sister, Noah, had cancer. Although it was a very difficult time for the family, Leah and Steven were icons of faith. As medical practitioners, they knew exactly what would happen, but they managed to find positivity in every setback.

I tried to help where I could, but I wanted to do more. I connected them to Chai Lifeline and Noah attended a summer at Camp Simcha - the happiest summer of her life, according to Noah.

Cecily is now my assistant in Chabad Hebrew School. Noah recently celebrated her long-term remission status. I was so privileged to participate in Chai Lifeline’s Tour de Simcha, dedicating my 30+ mile bike ride to Noah and her family. It was a true celebration of achdus as women from all walks of life biked, danced, and celebrated together.

Erev Purim saw me doing a last minute dash to BJ’s. A persistent salesperson stopped me and offered me a water testing kit. I was in too much of a rush to listen and brushed him off. He followed me through the aisles, trying to give his spiel again.

“There’s a Jewish holiday coming up and I need to cook for a bunch of people. I’m sorry. I don’t have time right now.”

“Which Jewish holiday?” he asked me.

“It’s a small one; you’ve probably never heard of it. It’s called Purim.”

“Of course I know what Purim is! I went to yeshiva in Brooklyn!” he answered with a grin.

I took his info (I’d learned my lesson from last time!) and invited him to our Purim party. Although I never did get my water tested, Stan became a beloved member of our community.

Stan loved to sing along with my husband and son as they chanted kiddush. In his later years, he suffered from a brain tumor that robbed him of his speech, but he still came. Even during a blizzard, he showed up. In the last weeks of his life, he came and spent Shabbos with us. My husband sang all the Shabbos songs with him, and although he couldn’t sing, he moved his mouth along. After he passed, Stan had a kosher burial, all thanks to his relentless nagging at BJ’s.

We’d found the perfect property for our Chabad House and eagerly put in a bid, already picking our color themes and donor plaques. We closed on the property on the Rebbe’s birthday, Yud Alef Nissan, a fittingly auspicious day. However, we quickly outgrew that building and needed a larger place. We soon found a buyer, but he didn’t show up to sign. We were now stuck in a binding lease of our new chabad house and an extra building we couldn’t use. Two properties. Two Payments.There was so much red tape to go through, but we still had hope we’d see Hashem’s plan for us.

My husband is a recovery therapist and spiritual counselor. We’ve hosted many former addicts at our Shabbos table and applauded their courage and strength. Many recovering addicts, after successfully completing rehab, are at a total loss. They’re not ready to live completely on their own yet, but they have nowhere else to go. Organizations like Crossroads opened “sober living homes” to fill this need.

My husband had many “clients” who wanted to stay connected to the Jewish community, but there was no kosher sober living home in the area. Add it together: useless building + people who need a place to recover = us opening a kosher sober living home. Everything worked out - and continues to work out - with perfect hashgacha pratis, despite our perceived roadblocks along the way.